Underestimated and disappointed, municipalities appoint 50% of social workers without proper education and without a license

About 300 young people complete their higher, 5-year studies for Social Workers every year, but the data researched by INA MEDIA reveals a bleak picture for this profession. Over 50% of social workers have no relevant education and have a degree in Horticulture, Zootechnics or Agronomy and some of them even have merely a high school education.

“Dedicating 5 years to the branch of Social Worker Studies and not being able to find employment is a disappointment. I loved this profession very much, but the state institutions did not open the door for me”, – says Maria Kaçorri, a graduate of Social Sciences, with a high average at the University of Tirana.

She did not practice her profession even  for a day, so disappointed she decided to leave Albania, to work in a job outside the profession, on the other side of the Adriatic.

Like Maria from Rrëshen, hundreds of young people, who graduate every year for Social Work Studies, find it impossible to find a job.

Eni Picaku has “locked away” the degree received for Social Work and currently works in a call center .

The 26-year-old shows that she has applied several times for a job, in accordance with the degree she holds, but without being able to secure an employment contract.

“The main problem I have encountered is the lack of experience. “Institutions require a minimum of two years of experience, an impossible condition to be met by an excellent student who has just graduated from the faculty,” says Eni .

While hundreds of young graduates are looking for a job, local institutions are filled with social workers without relevant education and in some cases even with a high school diploma.

314 social workers are appointed to the local government, but, according to the research of INA MEDIA , 52% of them are without the relevant education.

The collected data shows that 36 municipalities of the country have social workers graduated in other branches, not for Social Work in a 5-year period.

Shkodra, one of the largest municipalities in the country, has social workers without a university degree, but only with secondary education. At the same time, the municipalities of Memaliaj, Librazhd, Malësi e Madhe, Mirditë, Roskovec, Mat, Himara, Finiq, Këlcyrë, Pogradec, Peqin have social workers without a university degree.

From an official correspondence with all 61 municipalities of the country, INA MEDIA has prepared a clear picture of the situation. 51 municipalities have responded, while, even after the complaint to the Commissioner for the Right to Information, 10 municipalities, Fushë-Arrëz, Has, Kavaja, Kruja, Lezha, Përrenjas, Selenica, Shijak, Skrapar, Tropoja, refused to hand us the required data.

The data shows that professionals in the field have been replaced by individuals without proper specialization.

Referring to the data received from the municipalities themselves on the studies and training of social workers in office near the municipalities of Albania, they admit that some of them have studied for other professions, such as agronomist, lawyer, teacher, zootechnician, foreign languages, tourism, history, philosophy, political science, mathematics, etc.

Eni Picaku says that, in order to find a job, Social Work graduates must have either support or have political connections with heads of institutions.

"I do not trust state institutions. It depends on which party is in power and if you have references to the leaders of the institutions, otherwise no one is interested in diplomas or professionalism", - the irritated 26-year-old says.

Agron Haxhimali, an expert on local government policies, says that the social worker is the key link to enable economic empowerment and reintegration of families into economic assistance or individuals benefiting from the social protection scheme. For this reason, the proper education of the social worker is in the interest of the citizens, in addition to being a legal obligation.

"In the current situation, in remote and small municipalities, human resources as a whole, but also the potential for well-educated and well-infrmed people, is difficult to achieve. In these places, which remain empty, someone serves, but he must have the right education, to properly exercise his competence, in order to be as much help as possible for every citizen in need", - says Haxhimali.

Only professionals in this field can be enrolled in this Order and the main criterion is the completion of two full cycles of studies for Social Work.

Based on these legal provisions, the municipalities have violated the law on appointments of social workers without relevant education, while the Order of Social Workers has been pending for years.

INA MEDIA requested an explanation from the Department of Public Administration on the manner of employment of social workers in the municipality, but the institution officially transferred the competence to the local government.

Adriatik Lapaj explains that the appointments of social workers without proper education and without respecting the requirement for mandatory registration in the Order of Social Workers is na abuse of office by municipal leaders, although today we do not have an assessment of the damage to the state.

"Every institution that violates the law has consequences in relation to it. The leaders of the institutions in question, as long as they employ persons beyond the legal definitions, in case it is proven that this results in damage to the state or individuals, they may be consuming the criminal offense of abuse of office", - explains the lawyer.

On July 8, 2021 , the Ministry of Health and Social Welfare reminded all social workers to register with the Social Worker Order.

At the National Therapeutic and Rehabilitation Center for Children, the social workers filed the documents 7 years ago and have not yet received any information on registration or licensing. Efigena Bozo, head of the Psychosocial Service and Rehabilitation at the center, says they are still without a response from the relevant institution.

"In 2015, the social workers of the center have submitted the relevant documentation, requested by the ministry for the Order of Social Worker, but there is no official information or announcement for the meeting of the Assembly and the start of registration with this Order for licensing," - said Bozo.

INA MEDIA requested an explanation of the procedure followed for the registration of social workers in the Order and, on the other hand, whether the ministry had training for current staff, non-specialized in social work, but until the publication of this article did not receive a response .

On the other hand, the University Hospital Center "Mother Teresa" in Tirana, confirms that social workers, working at this institution, have responded to the call to register with the Order of Social Worker, without giving details of how it was processed.

Edlira Gjoni, lecturer at the Faculty of Social Sciences at the University of Tirana, sees the role of a social worker as irreplaceable.

"Initially to exhaust the possibilities of practicing the profession by those who have completed Social Work, before seeking help with human resources from other profiles. "I think that every profiled professional is much better than an approximate one", - says Gjoni.

Even the university hospitals in Tirana has neglected the position of social worker, even at the height of the COVID-19 pandemic .

The director of the university hospital "Shefqet Ndroqi", Silvana Bala, explains that this hospital has had no social workers or psychologists for 7 months. The situation becomes more alarming, if we take into account that this period also coincides with the peak of the situation of patients with COVID-19, who were treated in this structure. The Trauma Hospital became embroiled in a heated debate over the absence of a psychologist, as three patients with COVID-19 committed suicide on the premises of this hospital.

"A request has been made to the Ministry of Health and Social Protection with no. 11/149 Prot., Dated 30.06.2021, for a specialist - psychologist - for urgent needs of the hospital, which was not provided to us. There are no social workers and psychologists employed in the university hospital "Shefqet Ndroqi ", - is said in the official answer.

Also, there are no social workers in the structure of the Trauma University Hospital.

The Directorate of the Local Health Care Unit, Shkodra confirms that they have made a continuous request for training, but their request has not been met.

"During the period 2015-2020, no specific training was done for social workers, although our institution has often called for continuous training of psychosocial staff at our services," - said Suida Kuka, director of the Local Health Care Unit, Shkodër.

At the University of Elbasan, "Aleksandër Xhuvani", in the years 2011-2021 graduated 848 Social Workers at the Bachelor level, of which 144 students graduated part-time and 223 students graduated in Professional Master Social worker with children and family ”.

At the “Aleksandër Moisiu” University, Durrës, 197 students have graduated for Community and Social Services during 11 years.

At the University of Shkodra, "Luigj Gurakuqi", 531 students have graduated at the Bachelor level , branch of Social Work.

Meanwhile, in Albania, as for any other university branch, there is a lack of a detailed plan of how many social workers are needed in the labor market; which institutions need them and how the distribution should be performed.

Mirgit Vataj, chairman of the Order of Social Workers, explains that, as members of the Assembly are registered 1066 social workers, for whom there is still no accurate information in which institution they practice their profession. 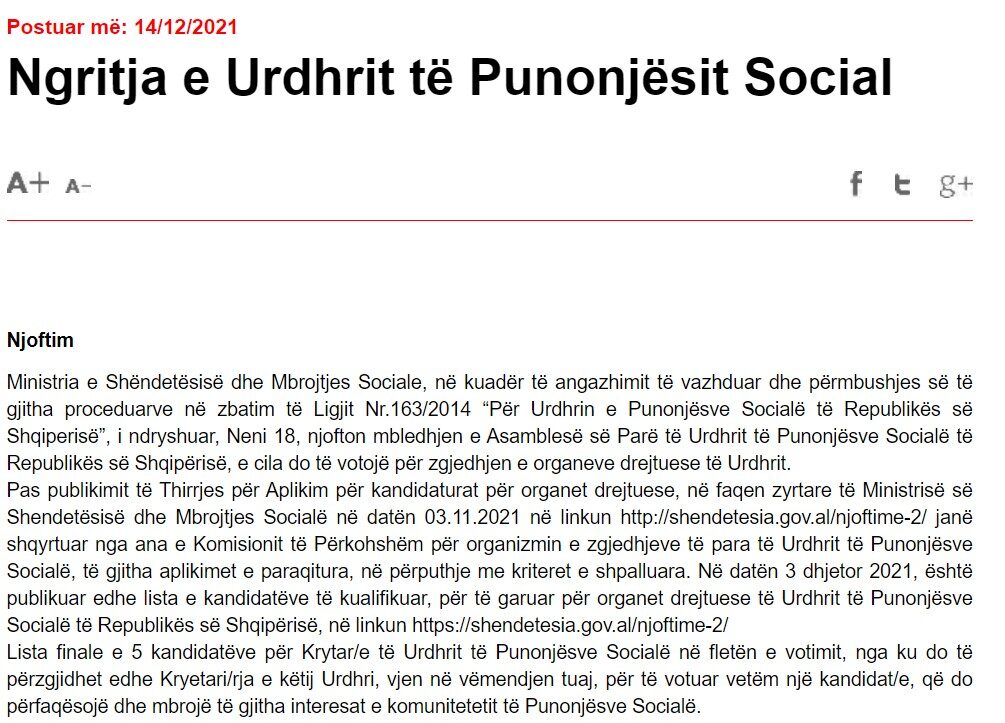 “Law 163/2014, as amended, on the Order of Social Workers, in Article 19, point 1, has a transitional provision, which specifies that individuals, who at the time of entry into force of this law exercise or have exercised the profession of social worker for a certain period of time, but do not have professional training and qualification as social workers, keep the job for a certain period, but are obliged to attend training and qualification programs and undergo the state exam" , - explains Vataj. 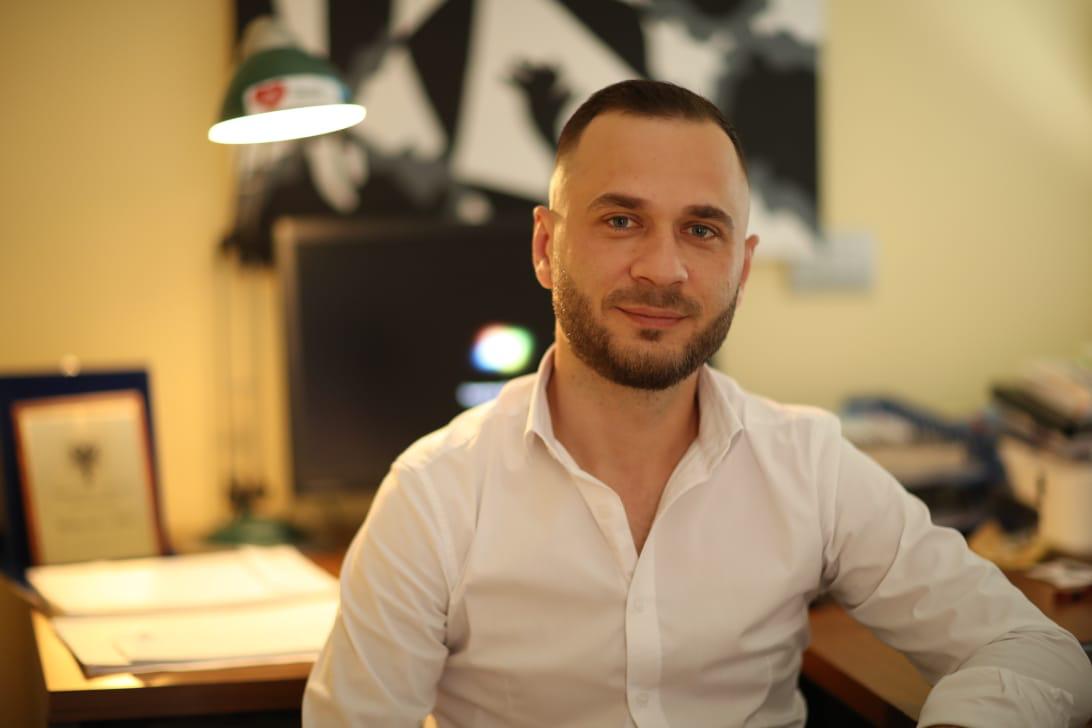 So, there will be a second opportunity for all those appointed as social workers to qualify by the state and this opportunity will be given only to university graduates, and persons who are only with secondary education will not have the opportunity to work as a social worker.

Despite the possibility provided by law 163/2014, the Order specifies that only persons who have completed full cycles of studies for Social Work can be registered with this body.

So the legal clash brings the urgent need for a final solution for social workers.

Eliona Kulluri Bimbashi, head of the Department of Labor and Social Policy, says that the space and demand for social workers in public and non-public services is very high, based on the legal and political framework of the Albanian state, but there are still problems.

"The reality shows us that there are inappropriate employment practices, especially in local institutions, but also the lack / non-fulfillment of social service structures, provided by law," explains Kulluri.

The head of the Department of Social Affairs and Policy further states that the implementation of the law is the best way to resolve such a contradiction, coupled with the awareness of institutions and lobbying to assess the necessity and irreplaceable role of social workers alongside professionals. others, as a guarantee to provide effective and quality services.

The law adopted in 2014 needs continuous improvements and consultations by stakeholders in order to create an effective and dignified Order.

Albanian consumers are paying double the price of bread

Reconstruction, a financial “black hole” in Kavaja, Durrës and Shijak